Today the mailman brought a box with our copies of The Wild Hunt: Stories of the Chase, the Air And Nothingness Press anthology in which we have a story, With One Eye, Bright As A Star. It’s a story we’re proud of, and we’re enormously happy that it found a home in such a nice collection! It’s difficult to convey in photographs what a nice feel the cover has, how neatly it lies in the hand, the bookish smell of it (even after a lengthy transatlantic journey…). This is not just a collection of words and stories, it’s a book as an object in itself!

You can get a little taste of our story, set in the grim and cold northern Netherlands, with our story trailer…

Air and Nothingness Press publishes poetry and translations in letterpress, and limited editions. Head over to their catalog to order your own copy of The Wild Hunt, or any of their other publications!

I’ve given myself a black eye, all in the interest of art! We’d already written that our story, With One Eye, Bright As A Star, will appear in the Air & Nothingness Press anthology The Wild Hunt. This evening we had some fun making a trailer for it. As main images I used the photo of my own grandfather, and an old photo of a farm, up in the north of the Netherlands. I imagine the story set on a farm not unlike this one.

Having raided Angeline’s make-up bag (Max Factor! We’re going up in the world!)…

…I went a bit further with the eye-shadow than would be usual for the Gothic vibe. A piece of blue paper, with a hole in it, then served as blue screen matte.

And then it was time for the soundtrack, made in Garageband, mixing my own voice, the sounds of the Midwinter Horn and footage of baying dogs and galloping horses. Then I combined everything in iMovie. And there we are: the trailer for With One Eye, Bright As A Star! I hope you enjoy it as much as we did making it.

The anthology can now be ordered via the Air And Nothingness Press website. It’s a limited edition, 158 pages perfect bound, with french flaps. A real ‘hebbeding’ as we call it in Dutch!

Today we received the proof of our story for the upcoming Air & Nothingness Press collection The Wild Hunt, which contains our tale With One Eye, Bright As A Star. This is something we’re enormously proud of!

Air & Nothingness Press publishes poetry and translations in letterpress and handmade limited editions. In an age of POD they publish collector’s items, books which are beautiful and nicely produced as objects. We already loved the cover of their previous collection, Upon a Once Time, and find the one for The Wild Hunt absolutely stunning! In French folded covers, it samples art by Franz von Stuck, and combines it with daring typography. We are very much looking forward to its appearance, so we can share it and our story with you!

We’re especially proud of this story appearing in the collection, as it’s one of the more personal stories we’ve written. Sure, it has a supernatural angle (how could it not!), but the boy at the centre of this particular Wild Hunt could have been me, in the distant past. It is set in the landscape where I grew up, where stories of the Wild Hunt are indeed part of our folklore. The boy’s grandfather meanwhile is a lot like the one I knew, with elements of my other grandfather, who died before I was born; he’d been in the Royal Dutch Cavalry before he settled back in the village where he was born (and I too) and became a farm hand. I never knew him, but have often imagined what he was like.

THE RED MAN AND OTHERS

"Gritty historical adventures with a dash of Fritz Leiber's insouciant humor, filtered through Adams' and Van Straten's own rueful yet hopeful sensibility... Issues of queerness, coping with disability, and found family arise organically within the stories, signalling not a deconstruction of sword & sorcery, but a broader inclusivity."
Ngo Vinh-Hoi, co-host, Appendix N Book Club podcasti

Now available as expanded paperback through Amazon and for Kindle 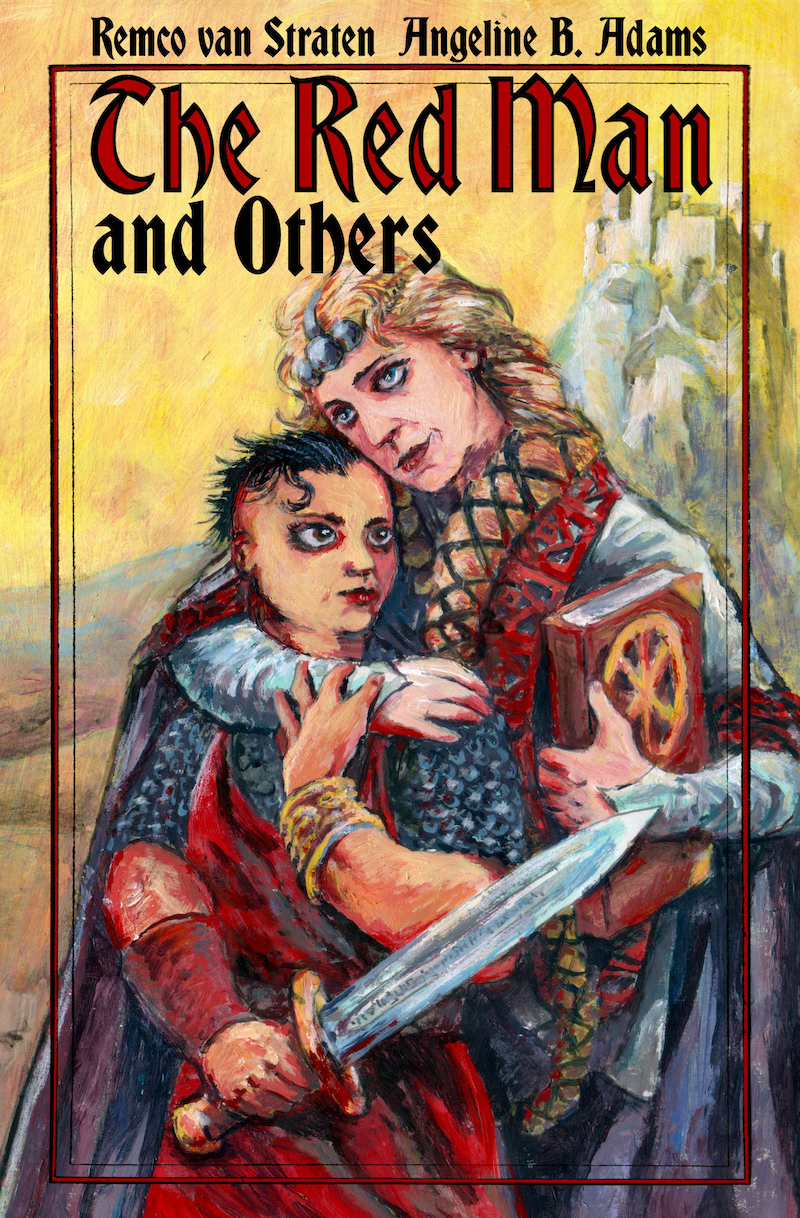